The irony of following a post titled “Living with Authenticity” with one titled “Faking it” is not lost on me.  I suppose authenticity can include fakeness.

Most of the original row houses in our neighborhood were inhabited by the “working class” population of South Philadelphia.  I had always assumed that our house never had ornate moldings seen in some of the stately homes in South Philly.  That is until I sneaked a peek inside our neighbors house.  The house adjacent to ours, like many adjacent row homes , appears to be identical to ours.  The main difference is that it retains all of its old world charm.  Our neighbor’s first floor is bisected by a long corridor leading through the entire house. We already knew that the previous owners had removed the long hallway in our house, so that was no surprise.   However, I was surprised to discover that our neighbor’s house was abundantly adorned with beautiful and intricate moldings on all the windows, doors and ceilings.  Despite being covered with layers of paint the beautiful designs of the moldings were still evident.  Once I got over the shock, envy washed over me.  Why would someone have removed all of that from our house!

Other than renovating our home to expose its original beauty we’ve never felt compelled to add any Victorian details.  However, after peeping into our neighbors house I embarked on a frenzied search of moldings and ceiling medallions.  I gave up on vintage realizing that it would be too much work to install and instead decided to buy a polyurethane medallion. After much online searching I discovered Architectural Depot which has an extensive selection of period medallions and moldings.

After much hemming and hawing I forked over $25 for a medallion.  When it arrived it looked all wrong and well…fake.  I figured that it would look better once I painted it but it didn’t.  I decided to mix paint and primer to blur the sharp lines a little.  The goal was to make it look like it had been on the ceiling since 1890! I kept painting it until it almost looked like an old plaster medallion.  After we installed it, it still looked fake!  So I spent several days caulking the seams and painting it over and over again.  I  painted and caulked late at night and early in the mornings so that I could really focus without Kiran and Jai wanting a turn.  After a week of constantly looking up to paint and caulk I ended up with a stiff neck and arm pain but the medallion still looked new-ish.  After another week of painting and caulking it is now looking a lot better. This little medallion makes the living room look much grander. 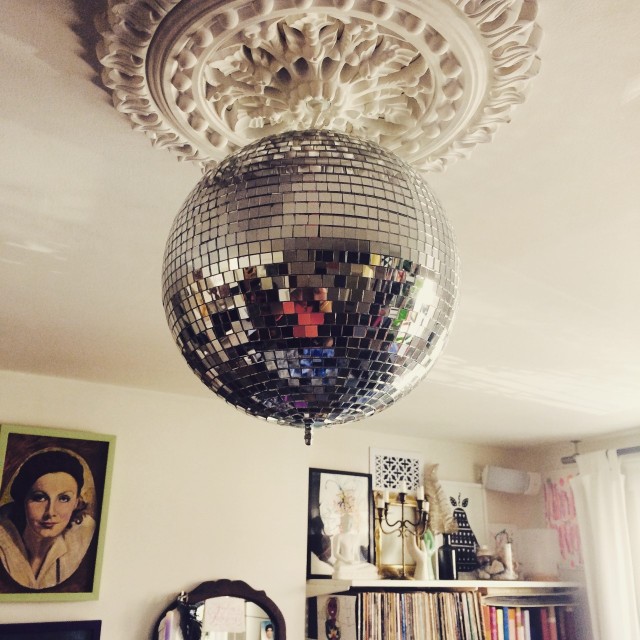 I have since learned that most of the row homes built around the time as ours  had plaster ceiling medallions which protected the ceiling from the flame of candles.  I think that I will be faking it and adding several more ceiling medallions.

I am not a huge fan of overhead lighting and since this house didn’t have an overhead light in the living room we decided to not add a ceiling fixture.  It would have been an unnecessary expense.  The disco ball, a gift from our neighbors, works great here.

This is a blog about houses, design, children and city living. I'm Madie!