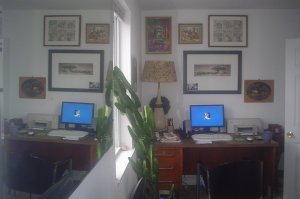 In this picture you can see the fabulous chair I bought on ebay. It looks great and is very comfortable. 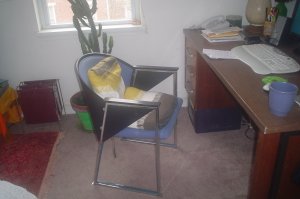 The cactus is 10 years old! We bought it as a tiny little plant when we first moved to Philly. I sort of injured him (yes it is a “he”) while moving him upstairs and I hope he lives. Kiran kept playing with him so he (the cactus) had to be moved. 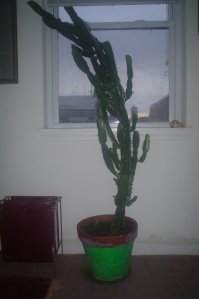 I guess I unofficially took some time off from blogging. Well, things have just been a little crazy. I am super busy at work. On top of that I am supposed to be planning Kiran’s birthday and we are also installing the baseboard molding in the living room and dining room. Our house has so many corners that the baseboard molding has been taking forever. As far as Kiran’s party goes so far I bought some paper daisies (as decoration). I did buy some wine but we’ve finished a lot of it! So I really need to go back to the liquor store, figure out what food I am going to make, finish installing the baseboard molding, clean the house, buy something for Kiran to wear, and then cook everything by Saturday morning. This doesn’t include all the stuff I have to get done for work. 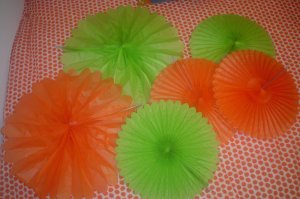 Paper daisies
I bought these paper daisies from here. The comforter cover is from Ikea and I bought is last week. I have been looking everywhere for an orange and white comforter cover and I was so excited to find this one and it was very cheap ($19.99 and includes two adorable pillow shams). 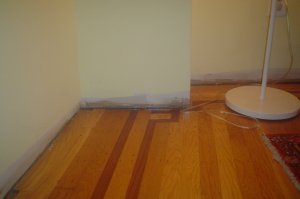 This pictures below are of the dining room wall with baseboard molding. We were able to salvage the plaster walls in here. It took countless hours to repair the plaster but it is definitely worth it. I love these walls. 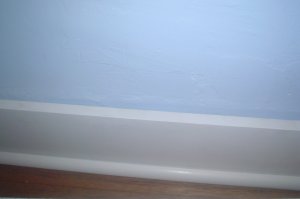 Without the top piece 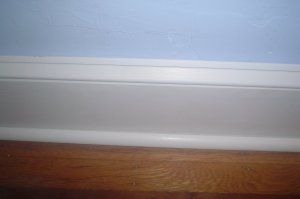 With the top piece
We bought primed pine and the molding consists of three different pieces: the flat piece, a top piece and the quarter round on the bottom. Our friend lent us his nail gun so installing the baseboards took a lot less time than when we did Kiran’s room. We still have to install the molding in the master bedroom…maybe this will be another project (with the wallpaper) for the Fall. Hopefully, we will finish caulking the molding and painting the nail holes tonight. I need the house to be in order. The disarray is driving me nuts. 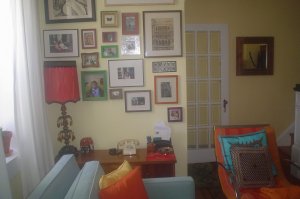 The picture above is of the wall next to the vestibule. It is full of pictures and some paintings. I love sitting on the couch and looking at all the pictures. 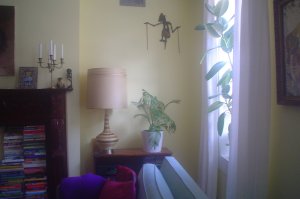 This picture is of the wall opposite, also next to the window. That is my rubber plant peeking out from the window. I planted one stalk from our bigger tree one year ago and it has already grown into a tall tree.

Because of all the work going on in the kitchen the house is not in picture-taking state. I will post more pictures of the living room when things get a little more organized. For now you can see that the mantle, is up. It is being used as a bookcase. The picture below is a close up of the mantel and books. 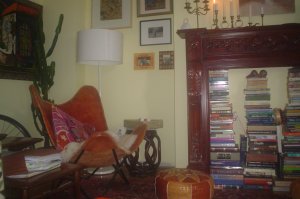 I know that Kiran is not going remember or care about his first birthday. But I want him to have a fabulous day and learn to enjoy the simple things in life. I feel that we, as a society, put a lot of emphasis on gifts, events, etc. for our kids’ birthdays. I want to make him feel extra special during his birthdays but without him needing things to make him feel special. When I was growing up in Holland our dutch friend’s would decorate their kid’s chairs with lots of fun things and allow the kids to sit at the head of the table. They kids were always excited by this (including me) and it made me feel very special. They did give gifts but it wasn’t like the extravagant gifts that kids here get.

I am not sure how I am going to decorate his little high chair. Instead of balloons I want to hang paper daisies, similar to what was done here: 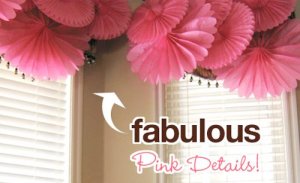 This way I can re-use them for all our parties and they look much nicer than balloons. I will probably get green and orange paper daisies. Re-using after all is the best recycling. 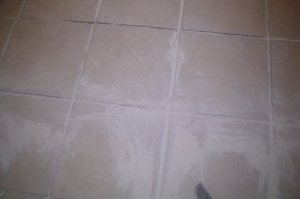 Well as things often tend to turn out with old houses things sort of took a turn for the worse. While he was removing the old grout a couple of the tiles broke! It appears that some of the old tiles weren’t even glued to the floor. There was no adhesive on the tiles at all. The good thing is we found the SKU number on the tiles which meant, at least theoretically, that we could find the tiles. Anyway, imagine my horror when my husband told told me that he had broken “a couple” of the tiles. How was I ever going to find tiles to match the old tiles? This is what the floor looks like now: 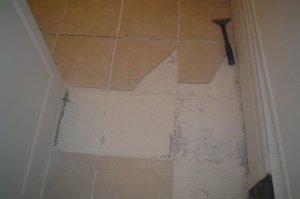 Hopefully, some time this week we can remove the old adhesive, lay the new tiles and finish re-grouting the floor. I need my kitchen back!

This has resulted in all my other projects being put on hold. I haven’t worked on the backyard, I haven’t started spring cleaning, and I haven’t finished lining the kitchen shelves. On top of all this Kiran’s birthday party is in three weeks. Thankfully the invitations are done (and they’ve been mailed).

This is a blog about houses, design, children and city living. I'm Madie!